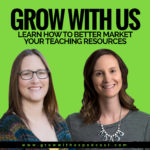 Grow with Angie and April: A Podcast for Teacherpreneurs
Creating a YouTube Channel for TpT with Guest Susan Jones

In this episode, Angie and April are speaking with guest Susan Jones about how to leverage YouTube for your TpT business. Join in on the conversation in the mastermind group at www.growwithusmastermind.com.

We’re excited to dive into talking about YouTube because we’ve been committed to using it but coming up with excuses for years. We’ve always seen YouTuber teachers who were in the classroom during their videos. That was kind of discouraging to us since we’re no longer in the classroom. So, we’re excited to have Susan Jones as a podcast guest to help get us motivated and moving!

Susan Jones started her YouTube channel, Susan Jones Teaching, in 2019 when she decided to start working on brand awareness. Social media wasn’t something that she enjoyed doing, and she wasn’t great at putting her face out there even though she had a successful TpT store.

Much like us, she had kind of written off YouTube because most of the TpTers on the platform were in the classroom and she wanted to create videos where she could just sit down and talk about a topic. She started with one video a week called “Susan’s Sunday Spotlight”. Most of the videos were less than5 minutes and she shared a game that teachers could use in their classrooms. She is now posting twice a week, and her channel has grown to over 81,000 subscribers.

Before we jump into all of Susan’s tips, we want to share what her process looks like for video creation along with the time it takes her to complete.

Her final edited videos are usually between 10-15 minutes. For each of the videos, she records between 30-45 minutes of herself talking. Since her videos are mainly her sitting and talking, she also records at least an hour or two of B roll footage. Examples of B roll might be a video of her taking a video or a resource being used that she can share on the YouTube video while she talks over it. This helps make her videos more exciting instead of her being a “talking head”.

Susan likes to have an outline created for each video before she gets started. On average, she estimates it takes her about and 90 minutes to film a video and around five hours to edit each one.

Susan uses her YouTube videos to focus on her main revenue streams. She focuses on one each week during the month and at the start of the month creates the 8-9 videos that will go out that month.

She’s found it’s the only way to really get things done consistently when you have so many moving pieces to your business. Trying to find time to film and edit one new video every week would be a lot more time-consuming and stressful than dedicated time to it all at once.

2. Hire someone to help

Susan’s sister has worked in her business for years and now dedicates most of her time to editing her YouTube videos. She takes the video and does everything to get it ready to publish. Then, she schedules them ahead of time so she’s able to work at her own pace. They are almost always scheduled beforehand instead of waiting until the day they are supposed to go live.

Her sister is the one who adds in the B roll film or extras to make the videos more engaging like a chalkboard bulletin out the reviewed points at the end complete with the sound of writing on a chalkboard. Since they’ve worked together for over a year on video editing now, she’s much more familiar with the process. However, it’s important to know that was a learning process, so don’t expect to be able to hire someone and not have to provide them with some guidance along the way.

Consistency is crucial on YouTube so Susan recommends you have a plan that helps you be successful. For her first year, she focused on sharing one game a week. She knew she had at least 52 games and would be able to have something for every week. She focused on keeping it simple.

The second year, in addition to a game, she focused on turning her blog posts into videos for her channel. By the time her third year came along, she had grown an audience and was able to do questions and answers too. This also allowed her to start sharing more about her products.

The first year, she had her whole year planned out in advance. Now she sticks to having plans for about a month and a half at a time.

Susan admits that understanding what videos are going to perform well on YouTube can be challenging, but she’s noticed a trend. If you have a video that starts to perform well and YouTube pushes it out to more people, they want to see more content like that from you. This helps her make her decisions on videos to film the following month.

Which of your videos they like will change from time to time, so you want to keep your eye on the analytics.

5. Keep going and be consistent

For the first year at least, you’re probably going to wonder if it’s worth it and if anyone is even listening. It can feel exhausting to produce YouTube videos regularly. But YouTube is a long game and it helps to know that going in.

Think of similar to TpT. Once you create your product and add it to TpT, it’s up there. Eventually, it starts making money and gains traction and then it can keep earning you money forever. YouTube works the same way.

6. Remember you have to start somewhere

Don’t wait until you have everything perfect to get started. Everyone has to start somewhere. Susan shares her early videos are not edited as well as they are now, but that’s OK. The important thing is getting started. You will improve over time.

Think about the type of videos you enjoy watching on YouTube and then watch and study those types of videos. What types of things are they doing that keep you interested? Then, try to mimic those things in your own videos.

Susan also recommends watching Cathrin Manning. She has a successful YouTube channel and shares a lot of helpful information.

TubeBuddy is a helpful tool to use that connects with YouTube. It helps you decipher if the topic you’re choosing and the title you’re writing are a good fit for your channel along with providing you stats about the search ratings around those words.

It also suggests competitive words for you to help you improve your searchability on YouTube. It can help you get your video to rank higher on YouTube. You will want to upgrade to the paid plan, but it’s well worth the investment.

YouTube has been the best way for Susan to connect with her audience. She gets a lot of feedback on her videos from her audience. People feel like she is their friend. It’s been a great way for her to get her personality across by being completely herself. Once she does that, people can decide if they like her or not but she feels at peace with it either way.

Don’t overwhelm yourself and try to take on too much at once. It’s going to be overwhelming naturally when you get started, but try to make it manageable. Set really small goals for yourself. It will take some time to grow but stay consistent with it little by little. Take time to celebrate your small successes along the way.

What equipment do you need?

Susan uses a Canon DSLR camera to shoot everything, however, she doesn’t recommend that you run out by a fancy camera. She already had her camera so she put it to use. In addition, she has a set of umbrella lights but she usually sticks to natural lighting. She also has a ton of SD cards used to shoot it all.

When it comes to editing, she and her sister use Wondershare Filmora. It’s a really easy editing program. They also pay around $15/month to use Epidemic Sound for all the sounds in her videos.

Susan doesn’t run any paid ads but she does have a sizable email list. She emails them every single video. YouTube is her main content channel now and she has stopped writing blog posts. She films her video first and then turns it into a blog.

In addition, her sister makes short 15-22 second clips that summarize each video. She shares those on Instagram stories and Facebook and Pinterest. She’s not seeing too much traction on the Pinterest videos yet though since you can only have one verified domain and currently it’s her blog.

There are mixed feelings about if TpTers should place ads on their YouTube video sense you’re trying to get people to buy your resources, but Susan has never had a problem from placing ads on her videos. When people show up to watch a video they pretty much expect there to be an ad on the video.

In 2021, her YouTube ads made up 2.8% of her revenue while her UTM codes that went straight to TpT from her channel accounted for 10% of her revenue. While the ad money isn’t significant, it’s basically free money up for grabs.

Back to Top
0 shares